Some of the best postgraduate research being conducted in the UK was recognised at the Essar sponsored SET for Britain Engineering Awards in Westminster last week. Minister of State for Universities and Science, Jo Johnson MP was among the many politicians who attended the event in Portcullis House, which was organised by the Parliamentary and Scientific Committee. Essar were represented at the event by Head of Marketing Colin Dixon, who addressed the audience on the crucial importance of engineering and technological innovation to the Essar business. 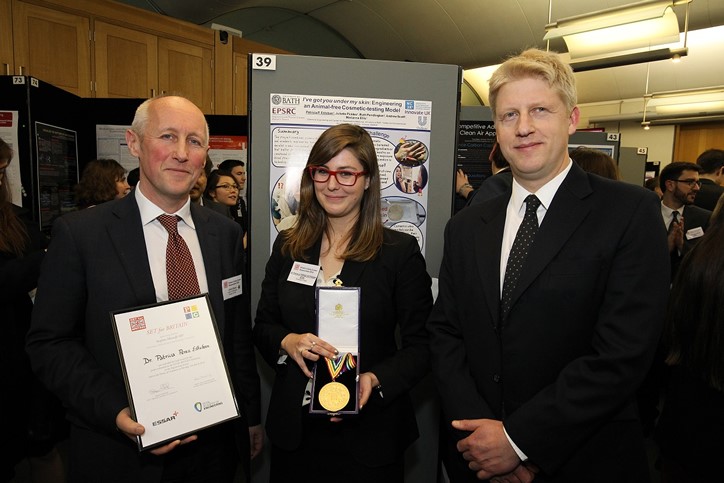 SET for Britain is a poster competition in the House of Commons - involving approximately 210 early stage or early career researchers - judged by professional and academic experts. It aims to help parliamentarians understand more about the UK’s thriving science and engineering base and rewards some of the strongest scientific and engineering research being undertaken in the UK.

Dr Patricia Perez Esteban, a Postdoctoral Research Assistant at the University of Bath, struck gold for engineering research on cosmetic testing, which earned her a gold medal and a £3,000 prize. Patricia submitted a poster about her work developing an animal-free cosmetic testing model to better predict how much of a compound will pass through the skin and enter the blood stream. She presented her research to MPs, Peers and a panel of expert judges and came top out of 60 entries in the engineering category.

Patricia said: “Winning the gold medal for the engineering session at SET for Britain today was the best recognition a researcher could have. The fact that I was shortlisted to show my work in Parliament was an honour on its own, but most of all receiving such positive feedback from the judges, MPs and my fellow researchers was the strongest reinforcement to continue my dream of pursuing a career in academia.”

Naresh Nayyar, Executive Chairman, Essar Oil UK commented: “Engineers and technologists provide key expertise within the Essar Oil UK business, which is why we are delighted to be able to support the SET for Britain initiative. These awards are important, because they support the excellent work being undertaken by these postgraduate students and help promote it to a much wider audience. The UK’s research and development capability is driven by the sort of innovation that is on display here and I’m proud that the SET for Britain engineering competition encourages such impressive research projects.”

Stephen Metcalfe MP, the Chair of the Parliamentary and Scientific Committee, thanked Essar for their support in making the event happen. He added: “This annual competition is an important date in the parliamentary calendar because it gives MPs an opportunity to speak to a wide range of the country’s best young researchers. These early career engineers, mathematicians and scientists are the architects of our future and SET for Britain is politicians’ best opportunity to meet them and understand their work.”